Interview with a Meteorologist

30
Matt Meister gets JobShadowed about his career as a meteorologist.  You can find him at www.krdo.com/index.html, his Facebook page, and on his Twitter feed in the sidebar of this interview. 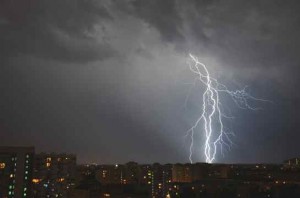 I make and present the forecast for our website, mobile apps, news radio station and 5, 6 and 10pm newscasts M-F. Additionally I supervise the other members of Stormtracker13 to develop our presentation as a cohesive unit and I oversee the maintenance of our 20+ weather computers.

In simplest terms my job consists of two things. 1) making the forecast and 2) giving it out!

My normal work day at the station is 2-11pm. If the weather warrants I get in earlier and stay later of course, but I also visit schools or civic groups for weather presentations before going in to the station and occasionally have to shoot promotional pieces as well.

I began my broadcasting career as the weekend weather anchor in Cheyenne, Wyoming at KGWN-TV.

The weather is different everyday, weather is the only part of a newscast that affects every person watching and I like being able to help people. This help can take several forms. From providing information to help viewers plan (what to wear, what to do for recreation, when to travel) or to keep families safe (from hail and tornadoes to icy roads and whiteouts) I need to be on my “A” game every day.

The most difficult thing about my job is the schedule. My wife and I have school age children and I end up missing some pretty important things due to my schedule.

How much money do Meteorologists make?

Salaries for television meteorologists vary wildly and depend on a number of factors. These can include market size (the bigger cities have more eyeballs watching tv and thus more people seeing ads. A 30 second commercial spot in Denver, Colorado costs an advertiser a lot more money than a 30 second commercial in Grand Junction, Colorado), length of time at the station, popularity in the market and a number of other factors. Entry level jobs can pay around $20,000 per year while some big market salaries can be several hundreds of thousands (or even more!).

How much money did/do you make starting out as a Meteorologists?

Granted it has been a decade and a half, but I made $10 dollars/hour at my first job!

There are primarily two education backgrounds among people that do weather on television. “Meteorologists” typically have at least a B.S. degree in Meteorology or Atmospheric Science while some television weathercasters have a journalism or communications degree.

Predicting the future! I have the potential to get egg on my face everyday. Occasionally you are going to blow a forecast and you have to be able to recover from that. I do my best to go back and figure our what I missed so that it doesn’t happen again. Over the years I’ve learned that I can be wrong even when I’m right! We know people are at home watching TV while they are living life. A Dad might be making lunch for the kids or conversing with his wife while the news is on. A Mom might be folding laundry or doing a crossword puzzle with the TV on in the background. Its easy for people to miss important parts of the message when attention is going elsewhere. My forecast is only as accurate as someone perceives it to be.

Additionally, I simply can’t cover every spot in my viewing area (from the Continental Divide to Kansas and from New Mexico to Denver) for the next seven days in the three minutes I get to present my forecast. I pick the one or two things that is most significantly going to affect the most amount of people and call it good. Its about all you can do and be a successful communicator in the television medium.

Knowing that I can provide some guidance to an individual or a family and occasionally some potentially life saving information makes it all worth it. For example, earlier this year we had some rare (for Colorado) early morning tornadoes that damaged several communties on the eastern plains. I didn’t go home until 6:30am and was totally exhausted but received this from a viewer the next day:

“At 1:20am I was awakened by distant thunder and lightning.  I turned on Channel 13 as you had said that you were going to stay on duty until severe threats expired basically.  There you were.  You were warning residents South of Lamar of a Tornado Warning and said that, we, in Lamar, should prepare to take cover, as that storm was headed our way….

But, you were there Matt.  Your dedication to your job and your Colorado Community is second to none.  I believe in my heart that you saved someones life that night.  Probably many!

I keep things like this as a reminder or why I do this when I’m having a challenging stretch.

You’ve got to LOVE the weather for it to be worth it. Don’t get into this just because you want to be on TV.

I’ve been at KRDO Newschannel 13 for more than ten years so I get about 3 weeks off per year plus some sick time.

That we have people that do our hair and makeup for us!

I’m wrestling with that right now actually. Call it a mid-life crisis if you want to, but I’ve been in the industry long enough that I know its strengths and weaknesses. I’m trying to be the best husband and father that I can and I’m trying to determine if being a television meteorologist allows that to happen. Many people in television news move around the country and find themselves in a new community every three to five years (remember that bigger cities tend to come with bigger paychecks). I’ve been blessed to be in Colorado Springs for an extended period of time and the thought of uprooting my family weighs on me.

There are so many facets to being a television meteorologist and the pace of the newsroom so fast, that they days just fly by!