Interview with a Meat Cutter/Entrepreneur 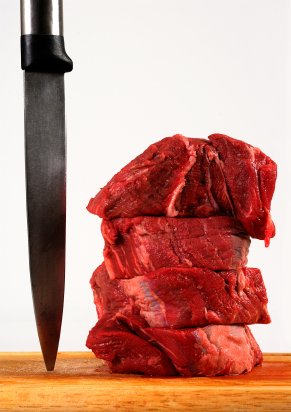 Basically, I bring boxed beef in, put it on the block, break it down, cut and trim it,  then retail it.

Setting the counter, unloading trucks, and waiting on customers. I cut beef, pork, chicken. Customers call in and they tell me how many steaks they want and how thick they want them, or what weight of roast they want.  We do wild game processing.  I work about nine hour days, pretty well staying at six days a week. I would say cutting meat is probably about a four hours of the day, and the rest of the time is paperwork, cleaning up, and waiting on customers.

People are not wanting prefab meat. They’re not wanting stuff that’s been injected with solutions and shot with carbon dioxide to keep it from changing colors. They want something fresh cut.

Most shops stay anywhere from 35 to 42 degrees working temperature. You’ll spend four hours a day in there and if you work in a grocery store you’ll spend eight hours a day.  You don’t notice the temperature.  You become very accustomed to it.  I wear shorts and short sleeves year round. I’ve been in it since I was 16. Most people will be chilled where I work, I’m not chilled. My freezer is set at minus 10, and its cold in there. High speed fans, about 35 miles per hour fans, you step in there it is cold. You can freeze a coke in about 10 minutes.

I’ve always been a hunter.  I started skinning squirrels when I was six years old. When I was 16 years old I started working in a grocery store.   They started training you back then, they had sides of beef, and we broke sides of beef. You start with a side of beef hanging on a hook, you break it down. You had to learn how to take a side of beef and merchandise it, make a dollar out of it. Sometimes you serve a lot of sirloin, sometimes you sell a lot of round steak, you’ve got to figure how to sell all of your sirloins and still make money. So there is a lot of merchandising in it. Yeah I’ve always pretty well. It just kind of came with naturally to me. I had good eye to hand coordination, and had enough strength to do the job.  A guy needs to be a 200 pound guy to be a good at this.  180 pounds you can make it if you work at it, you’ve got to stay in shape.

Keeping a full crew is probably the worst, training somebody. Very few people want to stay with the business.  Everybody thinks when they start they ought to make enough money to, immediate gratification, and it’s just not there. It’s a three-year apprenticeship program. It takes at least three years to learn what you’re doing, and then the money’s there. The first three years you have to learn what you’re doing. It’s kind of like getting paid to go to school as far as I’m concerned. You pay a guy to learn something, and a lot of people don’t want to wait until they get the knowledge of what they’re going to do to make a living.

It’s strictly just the profit line. There is not any other revenue that comes in here except fresh cut meat.  That’s why it’s important to make sure that your figures are right on the profit, because that’s all the money you are going to make.

How much money do you make?

On average I would say that my business here does a little over a half a million a year and I’ll probably take home around $100,000.

Would you say there are any perks to this job?

A lot of different jobs send you all over the world or whatever, and you don’t have that kind of perks here.  Not at all.  I guess one of the biggest benefits or perks about this is when it’s freezing rain outside and snowing, I’m standing in here and it’s the same temperature year round.  When its 100 degrees outside I’m still working inside, I’m in the cool year round. It’s comfortable, once you get used to the temperature it’s a comfortable temperature to work in year round.  So it’s a good job, every day is sunny.

A lot of math skills as far as education goes, high school education is plenty, but you need to have a little algebra and math basis more than anything.  The bottom line on meat is a small enough that if a man makes to many mistakes he’s not going to make any profit.

Most shops stay anywhere from 35 to 42 degrees working temperature.  Most people will be chilled where I work, I’m not chilled.  You grow accustomed to it. I wear shorts and short sleeves year round.  My freezer is set at minus 10, its cold in there.

You also need good hand eye coordination and upper body strength.  You do a lot of lifting and you use your arms constantly. If you don’t have a lot of strength in your hands then you’re going to wear out, you’ll end up with lots of cramps.  It’s kind of like like football training.  If they don’t condition themselves, they’ll go out there and cramp up. This is the same way.  During deer season we process 250 to 300 deer in deer season, and during that period of time you’re constantly pulling and using your arms, so all of your muscles get fatigued, really fatigued. You start at six o’clock in the morning and you go home at 10 o’clock at night.

Handling the rude customers. No matter what business you’re in you are usually going to have some people come in that are rude, and no matter what you do you’re not ever going to please them.

My customers coming back in, like the man that just left that said that “You still got the best ground beef in town” .  When people tell you you’ve got the best of this or the best of that, the satisfaction of people. I was going to sell out probably two years ago, except for the word kind of got out that I was going to sell, and I had so many people come in and ask me not to. And that was one of the main factors that made me stay.  People are not wanting prefab meat. They’re not wanting stuff that’s been injected with solutions and shot with carbon dioxide to keep it from changing colors. They want something fresh cut. They sure like to have it cut, they like to see it cut, they like to come in and watch what you’re doing, and that’s why I keep the deli like it is the way it’s open. People can watch me cut what I’m doing for them back there.

I think it’s a good career, I think it’s a great career. It’s been real good for me. All the friends that I know that’s been in it have done very well. People that stayed in the union…a union employee right now are making anywhere from 17 to probably $25 an hour, with all the benefits and everything else in all. I feel like there’s going to be more and more small businesses like this. This is the next trend right here. At one time it was really going down, and now it’s coming back. Because everyone wants fresh stuff, and there is too much bad publicity on the solution added. The solution is a saline solution used with lots of sodium in it, and everyone’s trying to get away from the sodium, and then you take the carbon dioxide shot in it which keeps it red so you don’t know really whether it’s bad or not till after you’ve eaten it. A lot of the tests they’ve been running have been showing as high as 70% of the product that’s in the counters have more pathogens in it than what they’re supposed to. This is the way…this is the way to go. It’s trending towards the smaller shops, it’s really coming back.  In North Little Rock there’s a boy that’s done very well.  He’s become a millionaire in just a few years with one down there.

I take about ten days on average.

Profit, more than anything. They think it’s…the price of meat always been higher than what a can of beans are. So they think there’s a lot of money in it, where really there’s more money in that can of beans then there is in meat. Grocery stores have always used meat for a draw. All your ads when you see the front page of any ad, it’s always the meat, and that’s what they use to draw people into their store to make their money off a can of beans.

I’d like to work five more years, I’ll be 62. At 62 years old I’d like to go ahead and quit. Everything is in line goal wise as far as where I’m standing financially. My shop’s done well, done very well. I’ve done better than what I expected.  I would like to leave the shop to somebody that would continue what I do. The markets here for it, money’s here for it, and the demands here, and I’d hate to leave my customers without it.

No, not really, I think it’s a very rewarding career. There’s a lot more rewarding financially than this, but as far as health and satisfaction I think you can’t beat it.