Interview with a sorority house mom 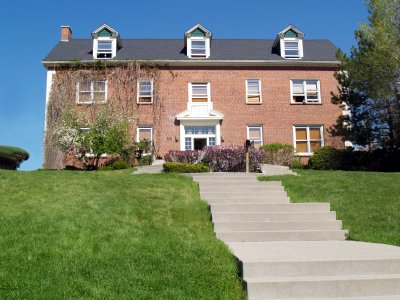 They call us a sorority house director which puts me in the property management category.

How would you describe what it’s like being a sorority house mom?

I live in a sorority house and every sorority house is different. But probably and this sounds funny about 90% of my job is just being here. They just want someone here to take care of things when they do arise.

Normally, on a day-to-day basis, I will oversee my staff, help to plan menus, and do the food orders or shopping. I also schedule repairs and maintenance to be done for the house. I eat all my meals with the girls and try to be here when they need me for something.

…these girls are my heroes. They’re funny, they’re bright. They party harder than any kids I’ve ever known, and then they study harder. They’re very well-rounded.

I communicate with the house corporation, which is the group of women or the corporation that actually owns the house. I do a good deal of talking or e-mailing with that group because they want to know everything that’s going on here and how. Like if the faucet in the senior wing is working, or what did we find out about that. Each house is going to vary widely though.

I was looking for something to do. You know, you always find things in a funny way. My sister has a lake house in a little town called Wimberley, Texas. She called one day and said, You need to be a sorority house mom. I said Yeah? That would be fun. But I don’t know how I would go about it and she said, Well, you call these two women. And these two women run a business where they place house moms all over the country in sororities and fraternities”and they happen to be located in that little town. And they have an ad in the local paper and my sister had just picked up the local paper one day and thought to herself, my sister would like this. So I called, and the lady I talked to was Barbara, and she said, Well, tell me about yourself. And I started off with, Well, I’m a Pi Phi¦ and you know, went on to tell her that I was a CPA and had owned and operated a business and I’ve got a lot of experience in a lot of different things, most of which I don’t ever want to do again.

So she told me what they had available all over the country and I immediately found a place I wanted to go. And it just happened to be the Pi Phi house there. Anyway, that’s how I got that job. I never would have known how to go about it. And probably half the women on this campus got their jobs through these two women in Wimberly, Texas.

What do you like about being a house mom?

Number one, these girls are my heroes. They’re funny, they’re bright. They party harder than any kids I’ve ever known, and then they study harder. They’re very well-rounded. I love being mom. I like everything about being a mom¦and I get all the fun parts. I get to have all the fun things, but yet I don’t have to pay for college or the orthodontist. I don’t have to bail them out of jail or anything the parents have to do. I just get the fun part of it.

Oh, sometimes what I dislike is having to deal with my board. The women who are my bosses. Especially when I’ve got two or three of them with really strong opinions about how things ought to be done and one of them will come and tell me to do this, and another one will come the next day and say, No, why don’t we do it this way, and you know, it puts me in a bind because they’re each telling me something different and I don’t know who’s advice to follow.

How much money do you make as a sorority house mom?

They used to want to tell me everything that everyone didn’t like about something¦be it the food or the colors of the rooms or whatever. I finally had to say, I can cater to vegetarians. I can cater to allergies. I can cater to religious beliefs. I cannot cater to pickiness. If you are so picky and you really don’t like Mexican food, that’s your problem, you’re going to want to go out and eat that day.

There are times I just feel like I’m being paid a whole lot to do nothing.

You have to like kids, if you don’t like college-age kids, this would not be the job for you.

The most challenging is getting through the first year. And I’ve heard that from others. That’s because you come in and everyone is used to things being done a certain way, but they don’t want to tell you what that is. When I came in I even asked the girls, What do you see me doing? What would you expect from me because I don’t know. And they never told me. And then they’d sit around and grouch, Well, she doesn’t do this and she doesn’t do that. Well, tell me what you want! Sometimes it’s difficult, but I think we’re on a pretty even keel right now. They used to want to tell me everything that everyone didn’t like about something¦be it the food or the colors of the rooms or whatever. I finally had to say, I can cater to vegetarians. I can cater to allergies. I can cater to religious beliefs. I cannot cater to pickiness. If you are so picky and you really don’t like Mexican food, that’s your problem, you’re going to want to go out and eat that day. Please don’t expect me to make everyone happy, every meal¦And they do much better because they understand that I’m not here to be their short order cook. But if they’re picky, that’s their problem, not mine.

What is most rewarding about being a house mom?

I think what I like”it might not be true”but I like thinking that I have made an impact on their lives. It is so rewarding to hear from girls, or just to have them come by the house, who have graduated two or three years ago.

When you go to a campus, find an ally, find a friend doing the same job, because a lot of times, all you really need is someone to talk to. She can’t solve your problems, but it does help if you have someone who kind of knows what you’re going through and can listen to you. What I have learned later life is to set boundaries. I think boundaries are really important. That first year I really didn’t have any. If they wanted to wake me up at 2 o’clock so that they could get juice, I’d get up and unlock the juice machine. Now I put out a 10 o’clock snack for them every school night, and if they come in at 9:15, I can say Are you going to starve to death before 10? Well, no, but I just¦ I said, Are you going to starve to death before 10? No, and I said, Then wait until 10. Now I have set more boundaries, and now they don’t test me quite as often. But I think as long as you’re willing to get up and do that for them, then they come to expect it. So, it’s kind of like being a mom or a dad that you have to know the things that you really want to do, but you also have to decide when you want to do them.

Well, like today, it’s what, 10:30, 11 o’clock in the morning and I’m still in my robe. I didn’t put feet on the floor until 9:30. Technically, I get two weekends a semester off. The norm appears to be about one weekend a semester, and I think that I could push that issue and get more time. I just haven’t needed to go anywhere or wanted to go anywhere. I get all the Christmas break, Spring break, Thanksgiving and all of that off and I’m paid. I get the two months, June and July off in the summertime, for which I’m not paid. I’d tend to sit at home and watch Law & Order no matter where I was, but if I want to go out to eat with a friend, I can do that. I’ll have my cell phone with me and if for whatever reason they needed to call me, I could come back. And that doesn’t really happen that often. The parents all have my cell phone, and I’ve never gotten a call from one of them at three in the morning saying Where is Mary?  They have called in the daytime and said, Mary has Strep throat. Would you go check on her? and I’d say Sure, no problem!  I think they like knowing that I’m here, and that I can take their temperature and I can recommend that they go to the doctor if I think they need to.

A common misconception would be that we’re all 75 years old and we just kind of sit in our apartments all day and do nothing. When I was in a sorority I kind of likened it to turning on a light switch. I don’t know how it works, I just knew that every day I’d go down, there was food. And then when I flipped the switch, the light’s going to come on. I don’t know how it works. I didn’t need to know how. But there really is more to it.

My goal is very simple. It’s to make this chapter the best in the country. The chapter where I went to college, just won the Balfour Cup, which is the national award for excellence in Pi Phi. It’s given out to one chapter every year. And I was just thrilled to bits that my chapter won it, but now my goal is for us to win here.

By and large how you feel about your job is really determined by your personality and your choices. I mean we each have obstacles that we don’t like, be it the house corporations or bratty girls, or lack of funds for what we consider important. So you can go in and say, Well, they don’t do this and therefore I hate it. Or you can also choose to say, Well, they do this. You know what? I’m going to work with that. I’m going to do it their way. You really just have to be flexible. I would say flexibility is the key to it and maintaining a positive attitude.