Interview with a Tower Climber 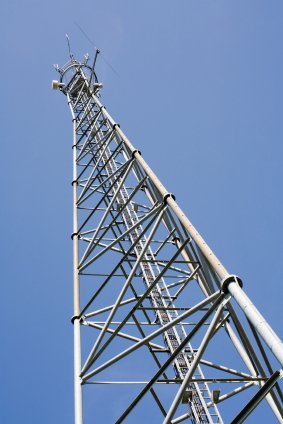 I’m the operations manager for a tower company, a company that builds broadcasts and communications towers, but I got my start climbing up and down them.

We do everything that’s involved with building and maintaining a tower.

What does your work entail as a tower climber?

We build the towers, we take them down, we put the lights on them, we change the lights, we paint them, we scrape them, we run the antennas and lines.

One of the more interesting things for most tower climbers is when they do a really high re-lamp, because most of them they’re are at night, and the broadcast towers could be 1,000 or 1,500-foot tall. They take the station off the air at one or two a.m. and you’re climbing in the wee hours of the morning changing the bulbs.
That would be one of the more interesting things, the view is really good. Other than that it’s a lot of hanging lines and putting nuts and bolts through holes and running cable. A lot of tower crews are on the road all the time, where they just go from one job to the other, always on a per diem and having to get lodging, never really putting down roots. We’re fortunate in our company here that we do most of our work centrally located, but there’s still a lot of time on the road, a lot of times it’s hotels and work, hotels and work.

I got started because I had relatives who owned a company. I had been in restaurant management for twenty years and I’d had enough of that. I thought it would be really exciting to get out and do something where you’d be physically challenged all the time and your decisions have more of an impact than whether the salad dressing’s correct. It takes a certain kind of person to really enjoy this though. You have to want to do it. If you’re just looking for a job, this isn’t for you.

What do you like about being a tower climber?

I like almost everything except for the winter time. You maintain a pretty high level of physical fitness, though you don’t end up looking like Arnold Schwarzenegger. You’re not cut and all that, but you’re dragging yourself up and down towers every day, so you do have a certain level of physical fitness. Secondly, you’re outside all the time. So if you like being outside that’s a big plus. Also, it’s usually small crews and you’re kind of out in the boondocks, so you have to be a problem-solver, and every situation is a little bit different, things never fit the way the blue prints show, so sometimes were called to do some reengineering to make things work. When I was climbing with we had a great bunch of guys that traveled together, and it was a team effort. Everybody pulled on the same rope.

One of the more interesting things for most tower climbers is when they do a really high re-lamp, because most of them are at night, and the broadcast towers could be 1,000 or 1,500-foot tall. They take the station off the air at one or two a.m. and you’re climbing in the wee hours of the morning changing the bulbs…the view is really good.

If you weren’t getting after it, someone else was. There was a credo where you wouldn’t leave a guy on the tower. If you did your portion of the work and were done with it, you wouldn’t scamper down and let the other guy finish it. Everybody came off together, everybody went up together. That was a lot of fun then. People related what we did to the last cowboys, because we were always traveling and always out and about. So it can be a lot of fun.

We’re hourly employees and depending on what level of climber you are; whether you’re a beginner or an elite climber, or if you’re taking crews, your pay varies.

How much money do you make?

What education or skills are needed to be a tower climber?

It goes without saying that when you’re going up a tower and you’re at any height at all you’re going to need great balance. You have to be focused to be successful as a tower climber. If you’re scatterbrained or if you don’t plan well, and you’re not paying attention, you could have accidents.

have to be focused because not only are you responsible for yourself, but you’re responsible for everybody that’s on the tower with you. If you drop things from any height, it could be very dangerous. As far as the skills that you need to develop, it could be as basic as sticking a big bolt through a big hole. Or it can be as complicated as learning some kind of test equipment and working with radio frequencies. There’s a wide gamut, so there’s room for everybody. At the beginning stages, if you can climb up a tower and be safe and follow instructions and follow the safety procedures, and put a bolt in a hole when someone tells you to, you can start. Then from there, as you gather more skills, you can take it to a higher level. Other than that, I think just stick-to-itiveness. You are going to get in that situation where it’s 2:00 in the morning and the dispatcher’s calling saying “It’s not working,” and it’s 20 degrees, and you just feel like crying and going home, so we look for guys that can just stick it out. The applicants that we look for must have a background in outside construction only because it takes a certain ruggedness to be outside and to manhandle that stuff. Anyone that really decides to, though, could give it a go.

Just the cold. Usually the physical aspect of climbing if you’re doing it every day isn’t a big deal. At the very beginning though, you’re using a whole different set of muscles, and so the first few weeks are challenging just because you’re tying to keep up with the guys that have been doing it for a while. But that’s probably not the most challenging. The most challenging for me is always the cold.

It’s going to sound weird but when you’re working with a small crew you develop a good sense of camaraderie. And also, when you’re out there at the beginning of the week and the truck comes with a bunch of steel that gets off-loaded and by the end of the week, there’s a 400-foot tower standing there, there’s a sense of accomplishment. I think that and being outside is most enjoyable. And you feel kind of free because you’re not super supervised. There’s nobody there but your crew, generally. As long as you’re taking care of business and things are going well no one messes with you.

In the winter the days get a lot shorter and you can’t be out as much and weather can affect you if you have iced up conditions or thunder storms. Usually, when the weather’s nice, you’re going at it from light to dark, so if you get a chance to get a rain-out day, you take advantage of it. So as far as time off you’re going at it all year as long as the weather’s working with you.

I think there’s two… one is that we make a ton of money. Because a lot of time you hear truck drivers on the radios as they’re going by saying, “Look, those guys got to either be making $50 an hour or on crack,” and neither one of those are true. And second one is that it’s so dangerous. It’s really not a dangerous job if you follow the rules and pay attention. There’s a lot of fatalities in the industry and it’s due to the fact that people don’t follow the rules or they’re not careful. I’d rather be on a tower than climbing a tree or on a roof. It really doesn’t have to be dangerous if you pay attention, and if your company follows the rules.

Probably one thing that I’m always amazed by is that when you’re selling a job or you’re talking to a customer and they call you at 3 in the morning for an emergency and they’re kind of shocked that it’s expensive. I’m surprised that people don’t expect that it’s going to be expensive to get a tower crew to come out and do some emergency dispatch on Christmas Eve. People pay $50 just to have the plumber stop by, why wouldn’t they expect it to be expensive to have a crew come out and climb a tower in the middle of the night?