My job really consists of two ways for me to make a living. Number one is to catch fish in tournaments and the prize money is a big way that I pay my bills. And the second way that I make a living is through sponsorships and representing a whole host of different companies with my main sponsor being Kellogg’s.

What would you say your work entails?

Well, it entails, number one, working hard and going to numerous lakes all over the country and meeting some of the best fishermen in the world and really trying to figure out the fish.

You’re competing against 150 of the best fishermen in the world. To compete at the highest level like that is the most challenging thing I’ve ever done in my life.

I have to pattern fish going into an event and then make good decisions and catch those fish during events so you can place high. If you do that you get paid well. The second part of that is promoting products everywhere I go.

If it’s a tournament week it gets pretty hectic. We have three official practice days on the FLW tour. We have an off day where we get equipment ready and we also do things for sponsors. Then our events starts. We have two days of events then they cut the top 20 the third day and down to the top 10 on the last day. So if I don’t make those last two days, I have to work an outdoor expo show that I do at a convention center. 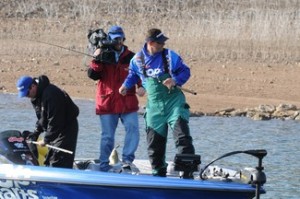 I got started by competing at the lower levels and I qualified my way up to a tour level in 2008.

But I really got started first as a young boy growing up on a farm; hunting and fishing and spending a tremendous amount of time outdoors fishing in creeks and ponds and that kind of thing. And then when I got into High School I had a really close family friend of ours, named Danny Sincoat, take me to a tournament and he did pretty well.  I really got bit by the bug after that competition. 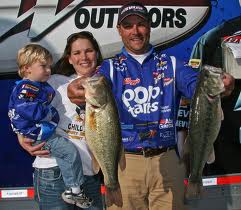 So that’s really all I wanted to do. I’ve wanted to be a professional fisherman ever since I was probably 10-years-old.

I went to college and got an Ag/Business degree from Arkansas Tech. I actually worked for Tyson Foods, where I started as a supervisor trainee in one of the plants and then worked my way up. I became a plant manager when I was about 28 and then did that job for about 6 years. And at the end of that, about ’07, I actually started working my way towards qualifying for the FLW tour. I had to make a decision there to continue working for Tyson Foods and pursue that career long-term or fish full time. So I chose, with the help of my wife, to be able to pursue my real dream of bass fishing.

Probably the travel. My family gets to go with me about half the time. I’m away from home some. So I don’t like being away from my wife and my little boy. But on the other part of that, I get a lot of quality time, 2 and 3 weeks at a time solid with them so it probably evens out. But I hate being away from home.

How do you make money or how are you compensated in this job?

How much money do you make as a pro bass fisherman?

How much money did you make starting out?

I was very fortunate in 07’ my first year on the FLW tour.  I think I won about $130,000 that year. So having that happen on my first year out was a big blessing.

What education or skills would say are needed to do this?

I would say definitely a college degree. When I speak at schools, I always tell people if you want to be a professional bass fisherman you really need a college degree.  I think you’ve got to have a degree, especially nowadays. There’s a lot of competition. A lot of people try to do it and there’s only so many sponsor dollars. And really a marketing degree is a big part. Marketing and public speaking are a really big part of being professional fisherman as well.

As far as skills, you’ve got to be blessed with some outdoor skills because you’re going up against guys that are just unbelievably good.  You’ve got to have a really positive attitude and you’ve got to be willing to work really hard.

What would say is the most challenging about what you do?

You’re competing against 150 of the best fishermen in the world.  To compete at the highest level like that is the most challenging thing I’ve ever done in my life.

What would you say is most rewarding?

What advice would offer someone considering this career?

A couple things. Number one, there’s no substitute for time on the water. Experience is a huge thing. So I would spend as much time in the outdoors as you can.  Number two is start off as co-angler in some of the lower levels. When you’re first starting off, try to fish with as many different people as you can and it’ll give you a different look. Each angler is going to fish a little bit different. I would really recommend someone spend some time in a coangler’s division or as an amateur in the back of the boat first.

How much time off do you get or take?

Three solid months off at the end of the year and then there’s sporadic weeks throughout the year that I’m off.  I fish about 16 events a year. There is quite a bit time off as far as when you’re not actually having an event.

That it’s really easy and you just go out there and fish and it’s really relaxing. It’s the farthest thing from that as you can be. There’s nothing relaxing about it.

You’re trying to represent your sponsor and you’re trying to do well.  If you have some periods when you don’t do well, you probably start losing sponsors. That hurts the pocketbook.  There’s a lot of pressure to perform just like any other professionally athlete.

What are your goals and dreams for the future in this career?

What else would like people to know about what you do?

What I would encourage everybody to do is really look into the sport more and see really how big it is. If you’re not familiar with professional bass fishing, go to www.flwoutdoors.com. Go to my website, www.gregbohannan.com or watch it on TV on Sunday on the Versus station and take a minute to see really how big the sport is. I think there’s 70 million people that fish. So that’s a big portion of the people out there.