Interview with a Cattle Farmer

Primarily I’m a cattle farmer. But as with most farming operations I end up being an investor in land almost as much as anything. 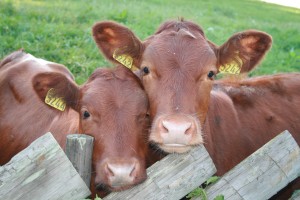 Well, I’ve got about the equivalent of 8-9 full time employees and then some additional part time workers.  I manage them and then there’s a fair amount of routines that I do myself on a daily basis. We do a fair amount of our own construction work since it’s a large operation.  So sometimes I’ll lead crews on that, then also there is the routine stuff like caring for the cattle, doctoring them, feeding them, etc.

I went through college with a chemical engineering degree and then a law degree.  I worked out in the law industry for four years and my dad hit me up again to come back to the farm. Growing up I would have never thought I’d do this in my life but I did and it has turned out great.  I came back in 1979, in 1979, that date may not sound important to you, but in that year 1979-1980, that was end of the boom in agriculture in terms of livestock prices, grain prices, land prices, just rocketed upward and it looked like it would go on forever.

And then about 1980, boy we had a tremendous not only a recession, but a depression in agriculture and where our commodity prices collapsed and in our area.  Land prices from about 1980-85 reduced over by more than half and we barely made it through it. We made it through it and in hindsight, I still do not know how we did it. We were able to fight through the tough times and even acquire and buy more land as people went under during the hard times.

Until recently, there was a fair amount of risk since we were expanding and borrowing a lot of money.  So there were a few sleepless nights when you might have an economic reversal in the market.

Having employees is probably the greatest joy and the greatest headache in life and that can be somewhat difficult.  But I’ve been doing this for almost 30 years now and you learn mechanisms of how to deal with managing employees, so it becomes easier to deal with over time.  But I think in this business that labor issues in general are probably one of the biggest headaches that people will have.

If we sell our cattle for more than what our expenses are we make money.   And the secondary way is just the long term appreciation of your real estate.  And so, those are probably the two, the realized profits and the unrealized profits.

How much money do you make as a cattle farmer?

Well, I hate to go there, but given that we’re a capital intensive operation we might net $200,000-$300,000 would probably be typical at this point after costs.

One, they would need to spend quite a bit of time in an apprenticeship with an existing operation for a period of years to figure out what works and what does not and I was fortunate enough to have my dad for that.  There are so many nuances you have to pick up on; whats going to be the most cost effective way to do it this year, working around weather, economics, people, and the contractors. I’d say if somebody was going to do this that they would clearly need to spend a number of years with somebody on the inside to get a good understanding of what’s going on.

There have been many, many cases where a wealthy person that has made money, inherited money, or made money in another industry decided to step into agriculture and most of the time they literally get their head handed to them and and lose a lot of money.  They think farming is simpler and easier than it is and they can apply knowledge from another industry and do it better than a lot of the cattlemen already out there.  But the majority of the time they lose their shirts.  And it’s because they don’t know the nuances of the business.  So, I would say it’s very important to get an apprenticeship and work in this business for a while to really understand what all goes into it.

What is most challenging about what you do?
Managing employees where they can work together, be productive, and have a similar vision of what we’re trying to accomplish.  That’s probably the biggest challenge requires the most of my ‘higher level thinking’, if you will.

Also, being outside is rewarding.   I bet most of my employees, one of the reasons they’re here rather than a higher paying job in town is that they’d rather be outside even though it’s often too hot or too cold, or raining and the wind blowing, we’re just kind of the type of people that don’t like being cooped up I guess.

To work with an existing operation to gain the experience.  That is first and foremost.  And then, if you’re wanting to get into the business, try looking for an existing operation that has shut down, or gone under financially etc.  Because the infrastructure, feed lots, facilities, etc. can be so expensive, you really need to get a good deal on those things to get started.  And so, your physical facilities would already be set up and ready to go instead of having to start with raw land from sratch.

But I can’t stress enough about having experience in the business.  Go work on a farm somewhere because boy, trying to jump in without the experience, you could have a Ph.D. in agronomy and livestock, and the chance of success would be about as strong as doing brain surgery on yourself, the chance of success is going to be pretty remote.

Typically with family vacations, a week or ten days.  But also there will be some agricultural events or such that I will take off for and I really enjoy.

But I don’t really take that much vacation.  As they say ‘work is only work if there’s something else you would rather be doing’.

When things are going well if I was offered to have a limo pick me up and a leer jet take me to the Super Bowl and then bring me back, I’d say, “No, I want to stay out here with my Track-ho and keep digging.” Or whatever job I’m working on.

And so, vacation only works if there’s something else you would rather be doing and in many cases, I probably get more joy out of this than normal people would.  It’s one of those jobs, if you didn’t love it, you’d hate it.  Fortunately I love it.

One, that agriculture today is mainly the family farm with the husband, the wife and the kid doing all the labor.  The most successful farming operations are much larger and would almost be considered businesses or industry.

Another one is that the economics are fairly easy, when in fact, the economics keep knocking people out of agriculture.  There is a relatively small number that go ahead and prosper.

I think in all of life, farming or whatever you do, what achieves and determines success is how well one is able to interact with other people.

Where you’re able to reach common goals, resolve conflicts, achieve win-win solutions, and have everybody on the same page.  Employers, suppliers, people I sell to, that is probably the most neglected item and it is clearly the most important.

You’ve got to foster relationships in this business, and in any business, and focus on how you and the people you do business with can grow together.  All too often I’ve seen people worry about how much the other guy is making, or how much some supplier of theirs is making, instead of looking at whether the relationship is mutually beneficial or not.

People who have done well in this business did not put together a big fortune by going out and screwing other people, or nickel and diming people, they did it by making others successful.